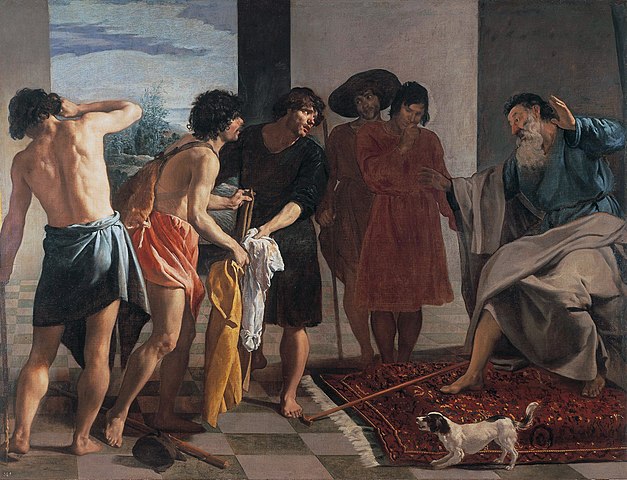 “Joseph’s Coat of Many Colors Brought to Jacob after Joseph Is Sold into Slavery” by Diego Velazquez (1630), El Escorial (PD-Art l Old-100)

“Fathers, do not provoke your children, lest they become discouraged” (Colossians 3: 21).

Human beings inherently crave connection.  When our basic need for relationship is denied, abuse victims can develop an intense emotional hunger.  Some of us attempt to satiate that hunger with food, others with possessions, still others with sex.

But these will not satisfy us.  So the emotional hunger returns, and the cycle begins all over again – each time destined to fail.

The reward – whether of food, material things, or sex – becomes punishment.  Each stop gap measure has negative consequences.  Each leaves us feeling empty.  Our sense of worthlessness resurfaces with renewed force.

Then the reward used to stem our emotional hunger becomes, itself, a source of shame.  It takes more and more food/things/sex to bring us even temporary relief.  Our desperation increases.

Consciously or not, we ache for forgiveness, someone to take the guilt away.  And there is Someone who can do that.  In fact, He longs to do that.  He died on a cross to do that.

But we did nothing to “deserve” abuse.  We do not, therefore, need forgiveness for our abuse.  What Jesus Christ does to relieve us of the false guilt for which we have been punishing ourselves is reveal a truth it would have been too painful for us to accept as children, i.e. that our parents and caregivers were the ones at fault.

Where their love failed us, His will not.  And the life He offers us is everlasting.

This series began last week with “Punishing Ourselves, Part 1 – Numbness and Deprivation”

Punishing Ourselves, Part 1 – Numbness and Deprivation

Though there are some hideous punishments inflicted on children, I will not be focusing on those here.  I want instead to talk about the punishment we inflict on ourselves.  The two are linked.

As abuse victims, we come to believe ourselves deficient, sinful, unworthy of love.

Whatever the details in our case, we come to see ourselves as guilty.  We may not be able to name the sins we committed to “deserve” our abuse.  But we are certain of our guilt.

It is as if we bear the mark of Cain without ever having committed the crime.

Those of us who were deprived of the basic necessities as children may deprive ourselves the same way as adults.

We cannot keep the refrigerator full or the pantry stocked.  We have difficulty using the new sheets, and may prefer sleeping on the couch or floor.  We resist purchasing a favorite food or appealing item of clothing for ourselves.  We take time off from work only reluctantly for a vacation.

Collateral to this, abuse victims who were physically and/or emotionally starved may hide food (or money and valuables) in secret spots around the house or yard.

While it may be painful to us, none of this behavior is a sign of “insanity” on our part.  It is simply a residual scar of the abuse inflicted on us, the rational response to irrational circumstances. END_OF_DOCUMENT_TOKEN_TO_BE_REPLACED

“Never, Never, Ever, say these 15 comments to a Victim of Abuse” by Sue Cass

Sue Cass is an abuse survivor and Christian author.  She blogs at Cyber Support Group https://cybersupportgroup.org, Elah Ministries Inc. http://www.elahministries.com, and Sue’s Pen2PaperBlog https://suespen2paper.com .  I recommend her books and blogs to you.

“There’s a difference between still being a victim of abuse and a survivor of abuse.

A person that still carries the shame, guilt, unforgiveness, has not healed the emotional issues from abuse, or is still being abused is continuing to be a victim.

Many people want to be helpful and many think that their questions and statements are innocent and do not affect those that have been abused, be it childhood sexual abuse or spousal rape and abuse, or physical and emotional abuse.

Over the years I have heard many testimonies of the added pain inflicted upon victims and survivors of these types of abuse. I have experienced many of them myself and I can tell you from experience the survivor of abuse may steal herself/himself for the onslaught of ‘innocent’ questions and statements but these questions and/or statements are knives deeply imbedding in the heart of the one who has survived the horrors of abuse.

In the case of a small child, where would they go? A two-year old cannot support themselves, nor a 5-year-old or 7, 10, or 12-year-old. Teenagers? Some do leave and they end up on the street, homeless, the property of a pimp, or within a gang doing drugs, robbing, stealing, scavenging for food in dumpsters, and the Lord only knows what else. Many do not have relatives that will sympathize and take them in. For the grown woman, some are threatened with death if she ever leaves, she has children to consider, a homeless shelter may be a temporary answer IF they are not full, she may not have ever held a job in her life and has no means of support. The list can go on and on and on. I highly recommend the book, “The Walking Wounded: The Path from Brokenness to Wholeness” by Secret Angel for a better understanding of a wife and mother living with an abusive husband.  Available at: www.amazon.com.

Many have, most won’t. With young children some have been told to “keep the secret no matter what!” Many were accused of lying, blamed for the assaults, beaten for “telling such lies,” ignored, threatened with family members being killed (and many other guilt-ridden consequences) Most have been subject to mind control from an early age, manipulated and controlled, blamed for the abuse by the abuser. One of the things I was told over and over as a young child, “Just stay away from him!” At two and three years old I was told, “If you wouldn’t sit on your dad’s lap…” We are made to feel it is all our fault! For teenagers some have been actually thrown out of the house at fifteen or sixteen years old or have run away because no-one believed them and the abuse continued. Some married the first guy to come along only to be abused now by a husband. Victims are seldom believed! Males are laughed at. “Men can’t be raped!” If that’s your attitude then read, “Unhelpful Myths About the Sexual Assault and Rape of Men.” Posted on this blog, June 10, 2015.

Unless you have been in our shoes there is no way you can even begin to understand or comprehend the dynamics that are or were going on in an abusive home. To lay this kind of condemnation on a victim is to jab the knife in real deep, smile sweetly, and then twist it!

Young children don’t know to do that.  Some teenagers do and end up in foster care only to be abused again or bounced from one place to another to another to another. Some, when the police arrive the abuser convinces the police the teen “has some mental problems.” Unless there are obvious bruises and cuts the police will file a report and leave.  With adults, many do but out of a false sense of “I love him” or “He loves me” they refuse to press charges once the police have come. Many do not get that opportunity for the control is so great there may not even be a phone available in the home. END_OF_DOCUMENT_TOKEN_TO_BE_REPLACED