This is a highly personal post.  Like most abuse victims and many depression sufferers, I am well familiar with despair.  Having been grievously wounded, we cannot help but wonder whether God has turned His back on us, whether He exists at all.

There are Christian denominations which view despair as sinful.  Not all Church Fathers (influential early theologians) would, however, agree [1].  Neither do I, for that matter.  This post was written to demonstrate that the despair abuse victims experience is NOT sinful, even from that strict perspective.

Depression sufferers often face condemnation from their well-meaning Christian friends.  Such condemnation is misplaced.  Depression should not be confused with despair.   And for despair to be considered “sinful”, certain conditions must be met.

When we despair – as most of us use the term today – we view our suffering as pointless, and God as powerless (or uninterested) to intervene.  This is situational despair.

For our hopelessness to qualify as “sinful”, we must have a genuine understanding of God; must be above the age of reason; must be in sound mind; and — in the strictest sense — must despair not about our circumstances, but about our Salvation.

Abuse victims (and depression sufferers) simply do not satisfy these conditions.

All these Judas is said to have rejected by his self-destructive act [3][4].  Judas viewed his betrayal of Christ as so heinous it was beyond God’s capacity to forgive.  He despaired, in other words, of his Salvation.

By contrast, the child who is daily abused and gives up hope is not guilty of the sin of despair.  For one thing, the child may not yet have reached the age of reason.  S/he may not, therefore, be capable of forming the necessary intent.

For another thing, a child who is abused is likely to have little or no understanding of God’s true nature.   S/he has no reason to believe in a just and loving God, so cannot be penalized for the failure to trust Him.  At worst, the child rejects a flawed image of God based on tragic experience with a hostile and painful world.

As important, the abused child despairs of his/her situation (not his/her eternal Salvation).  Hell is here and now.  If anything, unfounded accusations – in reality, out and out lies – about the child’s responsibility for the abuse and overall lack of worth may make death appear inviting.

Depression and the Will

Finally, adult or child, our capacity to sin is reduced when our will is compromised as, for instance, by the brain chemistry associated with depression.

God is hardly likely to condemn us for the sins committed against us, or the scars stemming from them.  That, at least, is the opinion of this lawyer.

“May the God of hope fill you with all joy and peace in believing, that you may abound in hope by the power of the Holy Spirit” (Rom. 15: 13).

[1]  Augustine believed that despair was not a sin.  Thomas Aquinas argued the point, seeing despair as a variant of pride.  Aquinas, however, distinguished hopelessness about our Salvation from hopelessness about our situation.  He explained that a physician might despair of curing a patient without committing sin.  Aquinas conceded that God could forgive despair, by way of a miracle.

[2]  It should be emphasized that not all Christian denominations view despair as equally sinful.  Unlike Catholics, Presbyterians and Baptists reject outright the concept of “mortal” sin, i.e. sin so serious it has the potential to cost us our Salvation.

[3]  Suicide has frequently been described as the “unpardonable” sin (Matt. 12: 31-32).  This though is an error.  According to Scripture, it is speaking against the Holy Spirit which will not be forgiven.  Since the Holy Spirit descended in the form of a dove when Christ’s divinity was revealed (Matt. 3: 16-17), the consensus now seems to be that the unpardonable sin actually signifies rejection of Christ’s offer of Salvation.

[4]  Even those who never publicly acknowledge Christ as their Savior may accept Him in their hearts, during their final moments.  “But do not forget this one thing dear friends:  With the Lord a day is like a thousand years, and a thousand years are like a day” (2 Peter 3: 8). 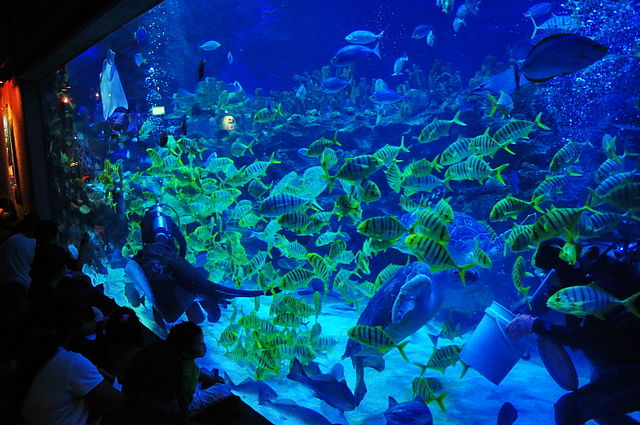 “Blue on blue, heartache on heartache
Blue on blue now that we are through…
Now the trees are bare
There’s sadness in the air
And I’m as blue as I can be”

Neglect to change the water in a fish tank, and it will soon cloud over.  Depression clouds the judgment of abuse victims, in much the same way.

Depression is a serious illness characterized by changes in brain chemistry.  Genetics, stress, major traumas such as war and child abuse, and medical conditions including AIDS, heart disease, multiple sclerosis, and lupus can all play a role.

Grief at the loss of a loved one is generally distinguished from depression.  The first can, however, lead to the second [1].

With depression, we see the world through “blue colored” glasses, no longer capable of assessing ourselves or our situation accurately.

All our failings – failings we have in common with the rest of humanity – are magnified.  Our defeats are remembered; our good qualities and genuine accomplishments, diminished in our eyes or forgotten entirely.

Because depression is a mood disorder, we are unaware of this shift toward blue.  The world looks bleak.  Our situation – whatever it may be – appears hopeless to us.  Our lives feel meaningless.  In effect, the water in our fish tank is cloudy, and we cannot see past the glass. END_OF_DOCUMENT_TOKEN_TO_BE_REPLACED

“Never, Never, Ever, say these 15 comments to a Victim of Abuse” by Sue Cass

Sue Cass is an abuse survivor and Christian author.  She blogs at Cyber Support Group https://cybersupportgroup.org, Elah Ministries Inc. http://www.elahministries.com, and Sue’s Pen2PaperBlog https://suespen2paper.com .  I recommend her books and blogs to you.

“There’s a difference between still being a victim of abuse and a survivor of abuse.

A person that still carries the shame, guilt, unforgiveness, has not healed the emotional issues from abuse, or is still being abused is continuing to be a victim.

Many people want to be helpful and many think that their questions and statements are innocent and do not affect those that have been abused, be it childhood sexual abuse or spousal rape and abuse, or physical and emotional abuse.

Over the years I have heard many testimonies of the added pain inflicted upon victims and survivors of these types of abuse. I have experienced many of them myself and I can tell you from experience the survivor of abuse may steal herself/himself for the onslaught of ‘innocent’ questions and statements but these questions and/or statements are knives deeply imbedding in the heart of the one who has survived the horrors of abuse.

In the case of a small child, where would they go? A two-year old cannot support themselves, nor a 5-year-old or 7, 10, or 12-year-old. Teenagers? Some do leave and they end up on the street, homeless, the property of a pimp, or within a gang doing drugs, robbing, stealing, scavenging for food in dumpsters, and the Lord only knows what else. Many do not have relatives that will sympathize and take them in. For the grown woman, some are threatened with death if she ever leaves, she has children to consider, a homeless shelter may be a temporary answer IF they are not full, she may not have ever held a job in her life and has no means of support. The list can go on and on and on. I highly recommend the book, “The Walking Wounded: The Path from Brokenness to Wholeness” by Secret Angel for a better understanding of a wife and mother living with an abusive husband.  Available at: www.amazon.com.

Many have, most won’t. With young children some have been told to “keep the secret no matter what!” Many were accused of lying, blamed for the assaults, beaten for “telling such lies,” ignored, threatened with family members being killed (and many other guilt-ridden consequences) Most have been subject to mind control from an early age, manipulated and controlled, blamed for the abuse by the abuser. One of the things I was told over and over as a young child, “Just stay away from him!” At two and three years old I was told, “If you wouldn’t sit on your dad’s lap…” We are made to feel it is all our fault! For teenagers some have been actually thrown out of the house at fifteen or sixteen years old or have run away because no-one believed them and the abuse continued. Some married the first guy to come along only to be abused now by a husband. Victims are seldom believed! Males are laughed at. “Men can’t be raped!” If that’s your attitude then read, “Unhelpful Myths About the Sexual Assault and Rape of Men.” Posted on this blog, June 10, 2015.

Unless you have been in our shoes there is no way you can even begin to understand or comprehend the dynamics that are or were going on in an abusive home. To lay this kind of condemnation on a victim is to jab the knife in real deep, smile sweetly, and then twist it!

Young children don’t know to do that.  Some teenagers do and end up in foster care only to be abused again or bounced from one place to another to another to another. Some, when the police arrive the abuser convinces the police the teen “has some mental problems.” Unless there are obvious bruises and cuts the police will file a report and leave.  With adults, many do but out of a false sense of “I love him” or “He loves me” they refuse to press charges once the police have come. Many do not get that opportunity for the control is so great there may not even be a phone available in the home. END_OF_DOCUMENT_TOKEN_TO_BE_REPLACED

Merel, an 18 month old labrador, is helping to relieve the fears of children and teens testifying in court, either as witnesses or victims [1].  The first of her kind in Ontario, Canada, Merel is a service dog with the Child Witness Program.

According to Rachel Crawford, the program coordinator, Merel plays a calming and supportive role.  “…[S]he’s very gentle.  She’s very loving…She’ll often sit right on the couch beside the child with her head on their lap or she’ll sit at their feet.”  Crawford adds, “It’s sort of hard to know how I ever did my work without her.  She helps build an instant rapport. ” END_OF_DOCUMENT_TOKEN_TO_BE_REPLACED 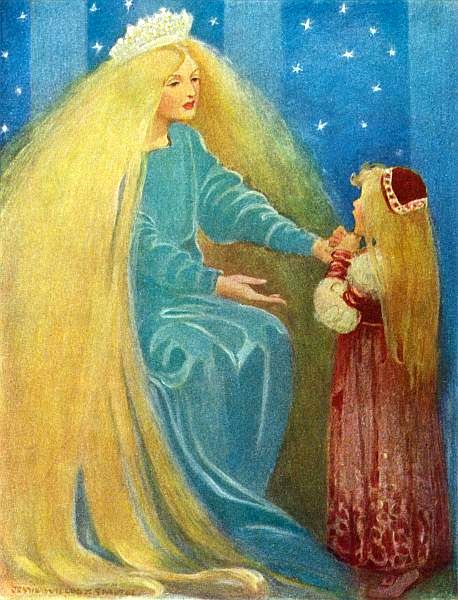 “Once upon a time…”  When we were children those were magical words.  They called up a world of fairy godmothers, princes slaying dragons, and wishes come true.  A fairy tale promised excitement and adventure.  Best of all, we were guaranteed a happy ending.

Andrew Lang compiled hundreds of fairy tales into The Fairy Books of Many Colors.  I devoured these as a child, one color after another – The Red Fairy Book, The Yellow Fairy Book, etc. – as fast as I could lay hands on them.  I simply could not get my fill.  Yet I could not have said at the time what the fascination was for me.

Psychologists have long argued over the meaning and usefulness of fairy tales.  These universally loved stories can be interpreted in a variety of ways.

The explanation that comes closest to my own experience is that fairy tales allow children to confront and deal with their fears and concerns – whether of abandonment (Hansel and Gretel), death (Snow White, Sleeping Beauty), rejection (Cinderella), etc. – in symbolic terms, so that those fears and concerns are reduced to manageable size.

Children get the satisfaction of slaying their own dragons…from a safe distance. END_OF_DOCUMENT_TOKEN_TO_BE_REPLACED