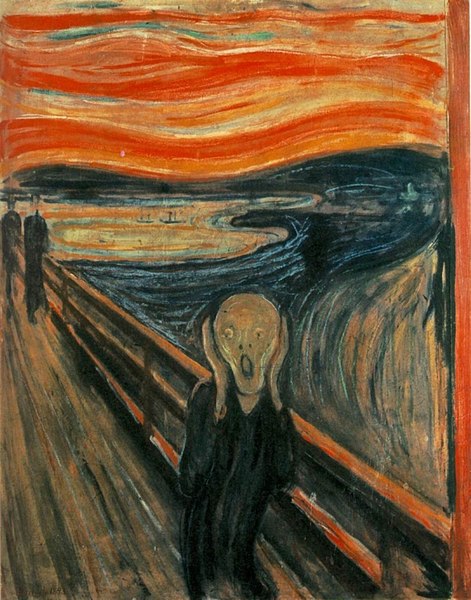 “God is our refuge and strength,
A very present help in trouble.
Therefore we will not fear,
Even though the earth be removed,
And though the mountains be carried into the midst of the sea…” (Ps. 46: 1-2).

Most people have experienced anxiety, in one situation or another.

The death of a loved one, divorce, serious illness, job loss, and moving are recognized as major stressors [1].  Other anxiety producing occasions include public speaking (always a favorite), waiting on approval for a mortgage, meeting a girlfriend’s parents for the first time, and having the in-laws over for Thanksgiving.

Then, of course, there are a host of phobias.  As a general rule narrowly focused, phobias are no small matter for those suffering from them.  Phobias include the fear of heights, spiders, snakes, birds, tight spaces, bridges, flying, and blood [2].

Anxiety is intended to alert us to potential danger, and prepare the body for it.

A part of the brain called the amygdala releases neuro-transmitters that initiate the so called “fight of flight” response, producing the sensations of anxiety [3].  The heart rate climbs; blood rushes to the muscles; the lungs work harder.  This process is largely autonomic.  We have, by design, very limited control.

The audience does or does not throw tomatoes.  The in-laws smile or grimace – it’s sometimes hard to tell the difference – and swallow their turkey.  We eventually get the mortgage.

In short, the body figures out we are going to survive.

About 40 million Americans, however, suffer from anxiety disorders [4].  Severe anxiety, whatever form it takes, is debilitating and can be crippling.

The severe anxiety resulting from traumas such war, rape, or child abuse is better known as Post-Traumatic Stress Disorder (PTSD) [5].

Whatever its origin, PTSD can cause recurrent, powerful, panic attacks, with or without an identifiable trigger.  These attacks are typically accompanied by heart palpitations, chest pain, the sensation of being smothered, and a feeling of dread.  A panic attack can, also, be experienced as paralysis and overwhelming fear.

PTSD sufferers may, in addition, experience flashbacks (vivid and disturbing memories, re-experienced involuntarily).  I have discussed these elsewhere [6].

Severe anxiety may present as obsessive compulsive disorder (OCD).  Sufferers are forced to lock and relock their doors, or repeat some other activity, to alleviate their anxiety.  Rituals become a way for sufferers to “control” the environment.

Another version of severe anxiety is characterized by exaggerated worries, for instance, about our security or that of loved ones.  Symptoms may include problems with sleep and/or concentration, headaches, shortness of breath, nausea, body aches, even hot flashes.

This is the kind of gnawing anxiety that may cause sufferers to seek out fortune tellers and the like.

Severe anxiety may, also, present as social anxiety.  In social anxiety, intense self-consciousness can cause sufferers to limit personal interaction, leading to a life of isolation.  Abuse victims are all too familiar with this flawed coping strategy.

Depression, eating disorders (anorexia, bulimia), or drug addiction can be associated with anxiety disorders.  These add another layer of complexity.

Part of what is painful about severe anxiety is the criticism we direct at ourselves.  Not only are abuse victims overcome during a panic attack, we savage ourselves for that perceived “defect”.

Equating anxiety with cowardice, we criticize ourselves for weakness in the face of what may seem harmless to others.

This criticism is groundless for three basic reasons:

Anxiety is not, in other words, a character defect on our part.  Severe anxiety is simply evidence of what we were forced to endure.

In effect, our bodies concluded long ago that the environment was so hostile it would be safer to remain constantly on alert.  Not such an irrational conclusion, when you come to think about it.

[3]  CalmClinic, “How the Amygdala Affects Anxiety” by Ryan Rivera and Rachel Ramos, http://www.calmclinic.com/anxiety/amygdala.

Healthy strategies for dealing with anxiety will be discussed next week, in the conclusion of this series