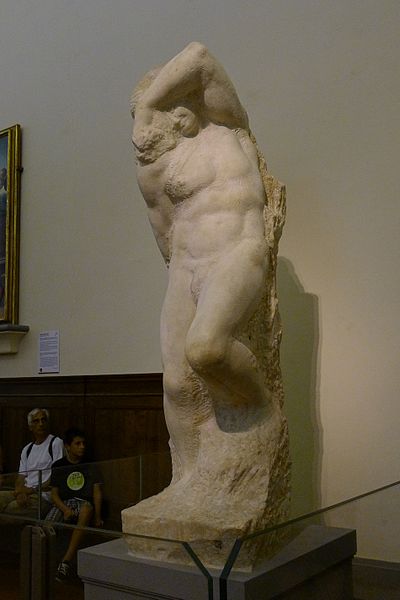 Those of you familiar with the perfection of Michelangelo’s “David” or “Pieta” may not know that he created a series of sculptures loosely referred to as the slaves, prisoners or captives.

Art critics argue over the merit of these – the central issue being whether Michelangelo intended them as finished works of art or not.  Details on these statues are vague, chisel marks still clearly visible.

The figures though are striking.  Incomplete, they struggle not only to free themselves from their chains, but from the very stone in which they are encased.

The Scars of Abuse

Like Michelangelo’s captives, the victims of childhood abuse wrestle with the scars of their abuse – low self-esteem, perfectionism, boundary issues, depression, anxiety, PTSD, relationship difficulties, sexual promiscuity and/or dysfunction, addiction, and the rest.  We struggle against the chains binding us, desperate to get free.

Michelangelo’s entire approach to sculpture was to envision the figure within.  He saw his role as first identifying that figure, then removing unnecessary elements to reveal the image present all along.

Despite our scars, God, too, sees the figure within.  Like a sculptor, He shapes us to an image only He can see.  Bit by bit, He removes unnecessary elements, always aware of the ultimate outcome.

The process is not, however, painless.  Because of that, we wrestle with the Sculptor.  In dark moments, we rage at the chisel and the Sculptor, both.

God’s plans for us are always for good.  Though we may not understand His purpose (and may chafe at His timing), ultimately He promises to fashion us into the image of His Son, Jesus Christ.

Without God’s intervention, we like Michelangelo’s captives would remain bound.   Because of it, we are guaranteed freedom and a beauty beyond description.