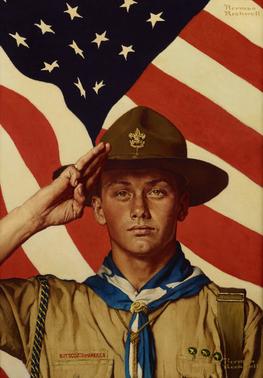 “We, Too, Have a Job to Do” by Norman Rockwell (Boy Scouts of America Calendar 1944), Source National Scouting Museum (c) copyright Brown & Bigelow Inc.

“On my honor, I will do my best to do my duty to God and my country, to obey the Scout Law, to help other people at all times, to keep myself physically strong, mentally awake and morally straight.”

A lawsuit has been filed against the Boy Scouts of America which alleges sexual abuse on a massive scale [1].

While this is not the first lawsuit alleging such abuse against the organization, some 350 scout leaders and other volunteers are identified as pedophiles.  Most are accused of abusing multiple boys.  Eight hundred or so victims have come forward, ranging in age from 14 to 88 years.

The complaint asserts that the Boys Scouts have known for decades that sexual predation is ongoing.

The organization has maintained a database of “ineligible” volunteers since the 1920s. That database, it has been learned, contains the names of 7819 suspected abusers (not all of whom, it must be emphasized, were permitted to join the organization), along with 12,254 reported victims [2].

Assuming all those accused are guilty, they still represent only a small fraction of the roughly one million adults who serve annually as troop leaders and in other positions with the Boy Scouts.  Since the organization’s inception, about 110 million boys have taken part in scouting.

Both New York and New Jersey have recently extended their Statutes of Limitations re: sexual abuse.  Confronted with mounting legal costs, the Boy Scouts may consider filing for bankruptcy.

The organization does nowadays conduct criminal background checks on its volunteers.

The Boy Scouts have reached an $850 million settlement with tens of thousands of US abuse victims.