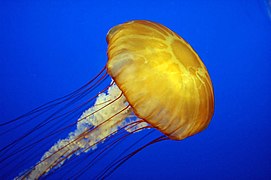 Jellyfish are equipped with stinging tentacles used to paralyze, capture, and kill their prey.  The largest known specimen, the lion’s mane or giant jelly, has tentacles which can reach 120 feet in length.  That is longer than a blue whale.

The sting of a jellyfish can be agony.  In humans, that sting can cause burning and blistering of the skin, difficulty breathing, changes in heart rate, chest pain, abdominal cramps, vomiting, muscle spasms, numbness, weakness, and collapse.

The tentacles can sting, even after a jellyfish has died.

The Tentacles of Abuse

Whether we suffer with physical ailments and visible scars or with depression, anxiety, and PTSD, the wounds stemming from our abuse are severe and real.  We are not weak.  We are not malingering.

It is, in some ways, easier when our wounds can be seen by the naked eye.  Burns are recognizable as such.  By contrast, the wounds of many abuse victims cannot be bandaged or sutured.  Invisible, those wounds can yet be deadly.

Because it was inflicted early in our lives, while we were most vulnerable, the damage done by abuse is long-lasting and multi-faceted.  Victims must endure it for decades, across the full range of life activities.  This can be exhausting.

Eventually, we may feel overwhelmed by anxiety or depression, as if we were drowning; may feel trapped by our past, despite our best efforts; may feel wrongly that ending our lives is the only way out.

The prophet, Jonah felt something of this.  He had been directed by God to preach to the people of Ninevah, known for their ferocity.  In an attempt to avoid what seemed certain death, Jonah booked passage on a ship headed in the opposite direction.

He did not get far.  To calm a storm which threatened the ship, Jonah asked to be thrown overboard, and was swallowed whole by what the Bible calls “a great fish”.

We all know the story.  Jonah prayed for deliverance, agreed to carry out God’s command, and three days later was deposited – alive – on Ninevah’s shore.  His mission to the city proved successful.

These days, people dispute the details of the story.  The lesson, however, is clear.  Jonah’s task was as much about his own faith, as it was about the spiritual welfare of Ninevah.

” ‘I called out to the Lord, out of my affliction, And He answered me; Out of the belly of Sheol I cried, and You heard my voice.  For You cast me into the deep, Into the heart of the seas, And the floods surrounded me; All Your waves and Your billows passed over me…Yet You have brought up my life from the pit, O Lord my God’ ” (Jonah 2: 2-3, 6).

With God’s help, we can survive abuse.  He walks with us through the darkest nights and the stormiest seas.  God can find us, even if we have been swallowed whole.

Jellyfish, by the way, are susceptible to a variety of predators.  These include marine birds like gulls, large fish like sharks, swordfish, and tunas, sea turtles, and other species of jellyfish.  Medical attention is highly recommended.  But a sting can be treated with vinegar in a pinch.