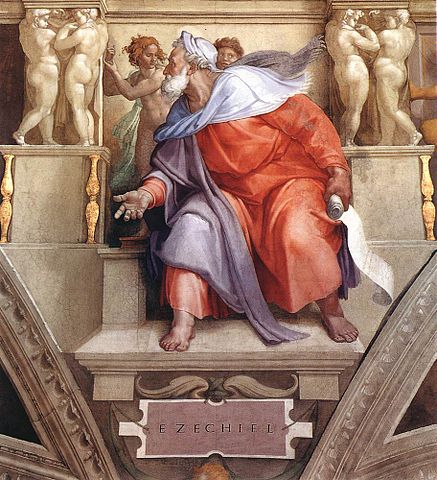 “Therefore prophesy and say to them, ‘Thus says the Lord God: “Behold, O My people, I will open your graves and cause you to come up from your graves, and bring you into the land of Israel” ‘ “ (Ezek. 37: 12).

The Old Testament prophet, Ezekiel had a widely known vision in a valley of dry bones.

The corpses there had been scorched by the sun, picked over by vultures and jackals.  God spoke to Ezekiel and asked if the bones could live again, to which Ezekiel replied that only God knew the answer.  God then instructed Ezekiel to prophecy, and life was restored to what was a vast army.

Though Bible commentators agree that the bones were a symbol of Israel, this passage has a highly personal meaning for me.

Many times in my life I have been at the end of my strength.

As an abuse survivor, I have walked lonely beaches at night, and cursed hope for drawing me forward toward another dawn.  As an advocate for the poor and a lawyer responsible for the welfare of clients and staff, I have fought many a losing battle.  As a woman with chronic health problems, I have sat in emergency rooms at 3AM, and more than once lain prostrate in public restrooms, unable even to call for help.

Rarely did God make Himself known to me, in these circumstances.  Unlike Ezekiel, I saw no visions, heard no voices.  But at all times God was present.  It was from God my strength derived, and He that carried me through the worst ordeals.

Mine were the dry bones. I knew that valley well.  Then the words of the prophecy leaped off the page at me:  I will open your grave and cause you to come up!  And God restored me to life, using the very circumstances which had grieved me to shape me for the tasks He had planned.

Are you, too, living in the grave?  Are you exhausted from wrestling with old demons?  Are you discouraged by lack of love or support?  Have you been betrayed?  Abandoned?  Picked over and torn apart by the world?  Has the person or thing you valued most –  a marriage, a child, a career – been wrenched from your grasp?

Have no doubt that God is there with you.  Your life is not over.  Your cause is not lost.  Your purpose has yet to be accomplished.

As for the army of which the Bible speaks, I like to think of that as an army of abuse survivors – vastly outnumbering predators, and determined to live God’s promises to the fullest extent.  After all, living well is the best revenge.