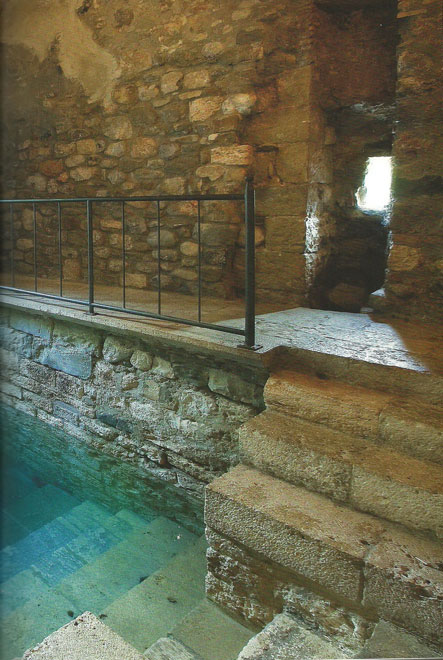 Filth pours out of the wall.  It may look like water, cool clear water, but it is filth.

In fact, the entire bathroom is contaminated.  God knows when it was last cleaned.  The room reeks of the sweat of prior occupants, is covered in a fine white powder from the predator’s own ablutions.

The door cannot be locked; the predator has seen to that.

You stand naked on the throw rug, an old shag which is, also, filthy, and prepare to step into the tub.  You grit your teeth, avoid looking at yourself in the small mirror that hangs over the sink.  The tub, too, is contaminated.  You know this must be done, so you step over the edge, cringing, toes curled under.

In the shower, you scrub your skin till it is raw.

You dread having to use the only towels available, stiff and worn, rough and faded towels.  You pull one down onto the floor, in order to be able to step out of the tub.  You carefully avoid touching the walls, touching the toilet tank.

You dry yourself awkwardly, as if drying off a stranger, avoid making eye contact with your image in the mirror.  Then you dress, step into slippers, gather your clothes and the used towels in a bundle for the hamper, and step over the threshold, out of the room.

You can never really get clean.  The bathroom may be contaminated by the predator.  But the dirt, the sin, is inside you.

This is how a victim of sexual abuse feels.  We despise ourselves, loathe our bodies, would shed them if we could [1].  This flesh is what he wants.  His hands have been all over it, taking possession of what is no longer ours.

Desperation alternates with hopelessness.  But there is no sign of rescue and no escape.

Even if there are intervals during which the abuse is interrupted, we carry the experience inside our heads.  It plays over and over again, like the film in a deserted theater, with abuse victims the only audience members.

It is that extended tension, the unrelenting nature of abuse, that can make Post Traumatic Stress Disorder so difficult to dislodge.

The psychological defenses victims of childhood abuse typically use include repression, denial, and dissociation [2].  Unfortunately, these coping strategies can be maladaptive in adulthood.

Repression allows the traumatic memories of abuse to be suppressed, sometimes for decades.  However, the emotions associated with abuse will rise to the surface.  Nightmares, flashbacks, and psychosomatic symptoms can result.  Suppressed anger may, for example, take the form of tension headaches [3].

Victims will frequently deny their victimization, and make excuses for their abusers.

Though unfounded, self-blame is common.  Acknowledging that we were powerless over our own fate can be more painful for victims than taking on guilt that does not rightly belong to us.

Dissociation involves a temporary loss of contact with reality.  It is triggered by sensations that call up painful memories.

Obsessive Compulsive Disorder (OCD) is a condition with endlessly repetitive thoughts and urges [4].  Frequently, these will focus on contamination and related cleansing rituals.

OCD (which has a genetic component) is not a psychological defense.  However, some victims of childhood sexual abuse use cleansing rituals, in an attempt to obtain relief from the anxiety and distress of feeling “dirty”.

Unfortunately, such cleansing rituals can consume significant amounts of time, and become disabling themselves.

“After Jesus called the crowd to Him, He said to them, ‘Hear and understand.  It is not what enters into the mouth that defiles the man, but what proceeds out of the mouth, this defiles the man’ ” (Matt. 15: 10-11).

Not only did Jesus Christ explain that the actions of others cannot defile us.  He came to earth as the pure and undefiled sacrifice Who took the place of sinners all.  Ritual cleansing is no longer necessary.  We have been cleansed from sin by the blood of Jesus Christ.

“…He [God] has given us new birth into a living hope through the resurrection of Jesus Christ from the dead, and into an inheritance that is imperishable, undefiled, and unfading, reserved in heaven for you…” (1 Peter 1: 3-4).

[1]  Sexually abused children may learn from their abusers to act in a “coquettish” manner.  But they are never responsible for that abuse.

[2]  Survivors of Childhood Abuse, “The Pain of Silence”, http://www.drmartinklein.com/survivors-of-childhood-abuse.html.

Wishing You All A Happy Turkey Day!